Everybody will recognize them immediately. When you see a pair of Vans sneakers anywhere in the world, you know right away exactly what they are. No matter the pattern or color, a pair of Vans is an unmistakable fashion statement.

From its most humble beginnings in a factory with a small storefront in Anaheim, CA, Vans has earned its global reputation as one of the most recognizable streetwear brands in the world and a vanguard of fashion.

So, where are Vans made today? Answering this question requires a look through the history and journey of the company itself.

Where Are Vans Made – The Beginning

The best way to answer that question is to start by looking back to where it all began. Paul Van Doren was a California native who was working as an executive at a national shoe company in the early 1960s.

He noticed that the shoe manufacturer made just a few pennies of each pair, while the retailers were able to capture the lion’s share of the markup. So Paul decided to cut out the middleman. He would manufacture and sell shoes directly to the public from a single location.

On March 16, 1966, Paul Van Doren and his brother Jim partnered up with their friends Serge Delia and Gordon Lee to start their business in Anaheim, CA. They called it the Van Doren Rubber Company.

The building was a small warehouse with a storefront. Van Doren built a shoe factory in the back with second-hand machinery. In the morning, they would take people’s orders and manufacture the shoes. The customers would come back in the afternoon for pick up. 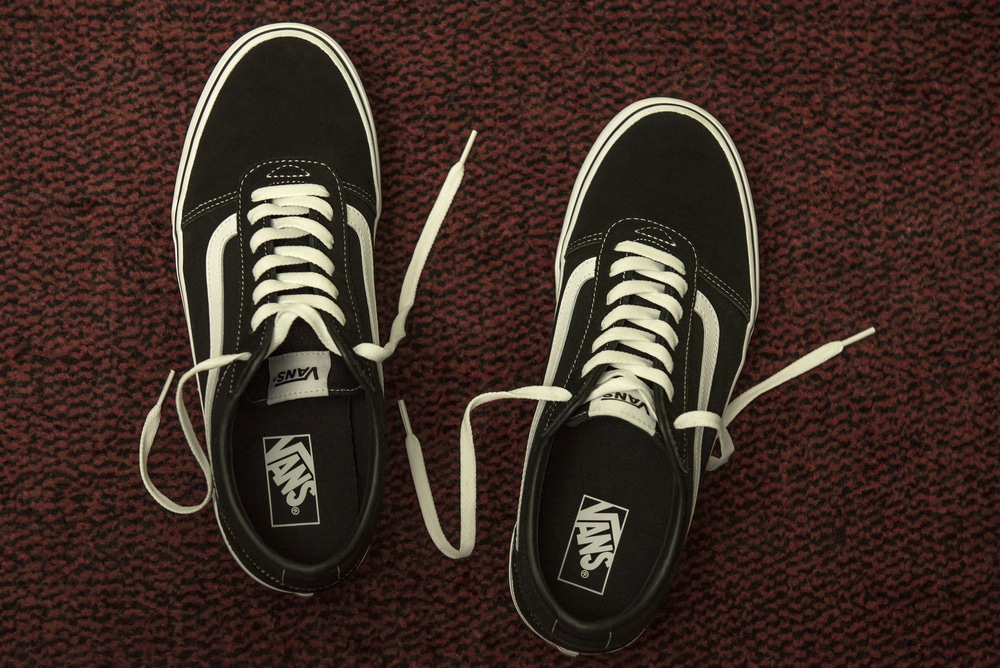 Custom From the Start

Legend has it that a customer came in on the first day and didn’t like the color selection. So, Van Doren told her to bring him the fabric she wanted for her shoes, and for an extra $0.50, he would make her shoes.

It would be the first in a proud history of custom shoes made by Vans. It’s also an insight into how Van Doren viewed business and branding. The outside-the-box thinking is what would lead to Vans’ future unique success.

Van Doren wanted his shoes to be comfortable, durable, and wearable on slippery boat decks. Therefore, her made his shoes with an extra thick rubber waffle sole. They kept people from slipping on those decks. They called their deck shoe the #44, now known as The Authentic.

It turns out they were also great for sticking on skateboards. The new fad known as skateboarding had taken California teen culture by storm. Kids all over the state were riding around on these things, and the Van Doren #44 was a perfect shoe for the job.

Soon, skaters adopted the fledgling shoe company as their go-to shoe for riding, giving them the nickname “House of Vans.” In the early ’70s, Van Doren Rubber Company began using the moniker “House of Vans” in its Anaheim shop window.

This fact was not lost on Van Doren, who saw the explosive popularity of the new sport. So, in 1976 he got together with skaters Stacy Peralta and Tony Alva. The skaters had a few tweaks in mind to better help them ride, like a padded collar, flashier color combos, and better ventilation.

So together, they began producing model #95, also known as The Era shoe. Like so many of their products, the new Era became an instant hit.

By this time, the “House of Vans” had several shops running throughout California, and sales were booming. All the manufacturing was still taking place at the Anaheim factory. The mid-’70s is also when Vans first started sporting their iconic sidestripe, initially added for enhanced support and structure.

As the company progressed through the ’70s, Van Doren began sponsoring more skaters and opening more factories to meet the explosive demand.

In addition, he began to sponsor BMX riders as well, as they particularly liked the new slip-on sneaker #98, AKA the Classic Slip-on

When the 1980s rolled around, Vans was doing a healthy business both nationally and internationally. They reigned supreme in the skater subculture. And although it was profitable, Vans had yet to reach the larger cultural diaspora.

But in 1982, that all changed. A little teen movie called Fast Times at Ridgemont High featured a surfer dude named Jeff Spicoli who wore checkered vans. He also famously whacked his skull with them.

The movie, the actor who played Spicoli (Sean Penn), and the shoes were all an overnight sensation. The film’s popularity launched Vans into a whole new level of success. Vans shoes were now a player in the world of fashion.

A Reach Too Far

Vans had so many orders coming in they hardly knew what to do with themselves. Perhaps drunk with money and dreams of worldwide conquest, Vans began expanding into all sorts of markets. Vans over-extended its reach and began to lose money despite its success.

For two years, Van Doren fought off creditors and tried to right the ship but realized that drastic measures were needed to save the company from being wiped out completely.

In 1984 Vans filed for chapter 11 bankruptcy, and Van Doren reorganized. While the brand was a worldwide hit, they still manufactured all their shoes from a few small factories in California. He told his employees that the company would tighten its belt and get back to basics.

He also promises them that they will come out of this stronger and more profitable. In 3 years, Paul Van Doren and Vans re-emerge from bankruptcy, having paid off every penny of debt. They are leaner and more efficient than ever, and their popularity begins to grow.

In 1988 Skater Steve Caballero became the first pro skater to have a signature Vans shoe, the Half Cab. It is around this time as well that Vans takes on a capital investment group to expand for the burgeoning global market.

Although the capital firm builds a brand new, state-of-the-art warehouse and manufacturing facility in California, it does not match the efficiency of Van Doren’s first operation in Anaheim, with its old equipment and insufficient space.

It is in this era of Vans history that their modern incarnation emerges. Van Doren realizes that the brand needs to be part of a lifestyle movement to capture and keep a global market. At this point, Vans begins to focus on marketing and branding.

As the investors push for moving production overseas, Van Doren insists that the manufacturing remains close to the heart of the company in California.

Van Doren held out from moving manufacturing throughout the ’80s and well into the ’90s. But, as market pressures increased and Vans made the leap to a publicly-traded company, the bulk of manufacturing shifted from California to China in 1993.

It is no coincidence that this followed Vans’ first public offering in 1991, with an IPO of $14/share. However, Vans maintained manufacturing output in California. Some Vans shoes would continue to be manufactured in the US over the next few years.

1993 was also the year that saw Vans’ first foray into snowboarding, with a snowboarding boot for the ‘93-’94 season. This addition shows a crucial step in Vans’ evolution toward a total lifestyle brand.

1996 was a pivotal year for Vans. It is in this year that Vans began its iconic sponsorship of the Warped Tour. More than anything else, this partnership moves Vans from a footwear company to a lifestyle brand.

In that same spirit, Vans sponsors the first-ever Triple Crown of Skateboarding event. By the end of the decade, Vans is the sponsor of the Triple Crown Games, which include skateboarding, BMX, surfing, Wakeboarding, and other extreme sports.

1996 is also when Vans produces its first collaboration project with lifestyle brand Supreme. They remake the iconic deck shoe as the Old Skool, manufactured in California, USA.

When the new millennium hits, Vans has transformed from a skater shoe company to a major lifestyle brand and cultural force in one decade. In this era, as Vans solidifies its global appeal, its manufacturing moves entirely out of the US and into China and Vietnam.

A Cultural Cornerstone in Streetwear

Vans saw only more success and growth with the new millennium. As the popularity of the X games and the Warped tour grew, so did Vans’ reach and influence. They were now the brand synonymous with cutting-edge sports and music.

And remember the story about the woman who wanted a custom pair on that first day? In 2006 Vans renewed their attention to the customer by offering customizable shoes to anyone who wanted them. Still today, customers can design their own unique shoes and have them delivered to their door.

The past 20 years have only seen Vans’ popularity, innovation, and brand legacy grow. The name is now inextricable from extreme sports and street culture. Vans products are sold globally through Vans stores, online, and with third-party retailers.

Read Also: Do You Wear Socks With Vans Slip On Shoes?

Wrapping Up – Where Are Vans Made Today?

Today, Vans products are manufactured worldwide, from Vietnam to Bulgaria, Turkey to Cambodia, from Serbia to the US. It was in just the past couple of years that Vans built its brand new global headquarters in Costa Mesa, CA, keeping the heart of the company in California.

And although Vans now has shoe sales of around 80 million pairs per year, the construction and materials have remained almost unchanged from the original designs made by Van Doren.